You are here: Home > Valais in a nutshell > Geography > The ABC of municipalities > Westlich Raron > Ausserberg 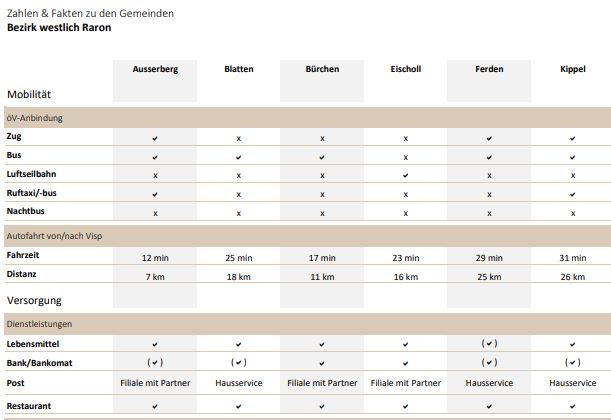 Much of Ausserberg’s history relates to water concerns: water to irrigate its very dry slopes, for example, or for its residents to drink. Because of this, people often refer to it as “Ausserberg of the sacred waters”, in reference to the Swiss film about a village struggling for its water supply.

The picturesque mountain community is situated on the south-facing slope of the Rhone Valley in the UNESCO Swiss Alps Jungfrau-Aletsch World Heritage Site. It has good public transport connections to Visp (PostBus), Brig and Bern (BLS railway) and the drive to Visp takes around 10 minutes. The municipality in the Sonnige Halden region has 623 inhabitants and is very active thanks to its 23 clubs. In addition to the kindergarten, the school system currently offers two levels of primary school education (3H to 5H and 6H to 8H). The orientation school is located in Visp.

The municipal council has worked for generations to make local life as straightforward as possible and has endeavoured to maintain its excellent residential area through constant investment. The management of the Alps and the hiking trails above Ausserberg has opened up a world of possibilities in the municipality, especially when it comes to hiking tourism. The “Wiwanni” and “Baltschiederklause” huts offer their guests a relaxed and hospitable place to stay.

Life in Ausserberg combines progress, tradition, and, most importantly, the chance to live on the sunny side!